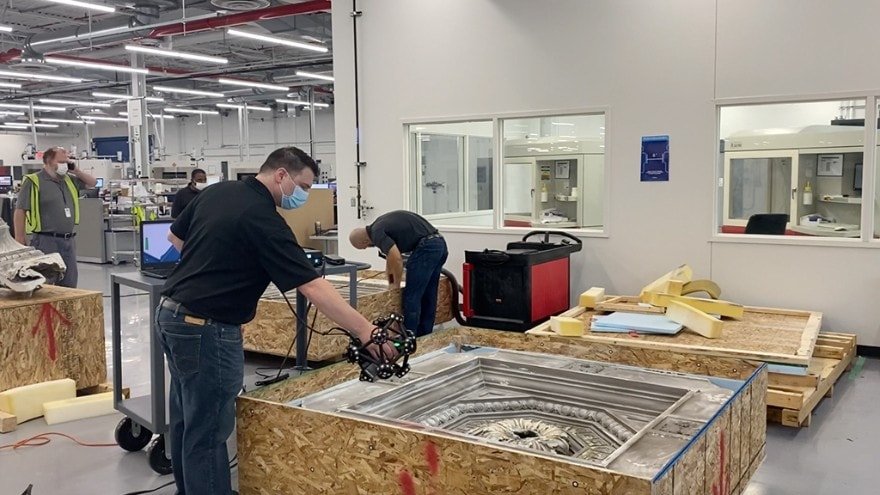 “Ford could have decided to just modernize Michigan Central Station,” explained Harold Sears, Technical Leader of Additive Manufacturing Technologies at Ford. “But they’re taking great efforts to make sure this thing really reflects the way this building looked and felt inside and outside.”

Ford’s Michigan Central Station revamp started in 2018, amid discussions on how to help restore some of the elements which adorn its ceilings and large arch windows. Over the last century, many of the ex-train depot’s pieces have been lost, and while photos were initially used as a basis for creating replicas, it became clear that 3D scanning was a better option.

After some of the original pieces were donated back to Ford the scanning and reverse engineering could take place. Scan data from the pieces was manipulated in CAD to combine broken pieces, redesign missing areas, and carry out resizing and smoothing if needed.

After the reverse engineering the 3D printing phase took place at Ford’s AMC in Redford Township, Michigan. This resulted in the production of hundreds of replicas in 20 different variants. Many of these circular rosettes were created with slight design modifications to allow for their hanging in separate areas of the station.

The historic station’s overall restoration isn’t set to finish until late-2022 / early-2023, but Ford’s team has been quick to hail the project as a success story for the technology’s wider development.

“We made these parts in-house,” added Bob Bedard, Supervisor of Additive Manufacturing Plastics at Ford. “Part of our drive as a company is to bring new technologies into production applications when they’re ready, and to always be innovating to find a better, more sustainable, safer way to bring things to fruition. It’s a beautiful thing we could do that for this priceless landmark.”